With a higher intrinsic electrical conductivity and denser intercalation sites, the metallic phase of MoS2 is now being explored as an anode material to promote the rate performance of lithium-ion batteries and to eliminate the need for more conductive additives. Rare in nature, the metallic phase is only metastable, and recent solvothermal attempts to fabricate it have all used additives or substrates. The more traditional methods for its preparation use alkali metal intercalation and exfoliation, which can be complex and even dangerous.

Molybdenum disulfide (MoS2) is an ever-popular material for electrochemical applications such as in lithium-ion batteries, for which the high theoretical capacity of its semiconducting trigonal 2H phase has been thoroughly explored. The intrinsic conductivity of this phase is, however, not so high, and its structures are subject to degradation during cycling. Hybridization with more conductive carbon materials can improve battery performance, but also increases the cost, the electrolyte consumption, and the barrier to reacting the MoS2 with lithium.

A group at Northeastern University’s Department of Mechanical and Industrial Engineering (USA) has now created a porous nanotube electrode from pure metallic-phase MoS2. This anode was templated using anodic aluminium oxide nanotubes: 2D metallic MoS2 nanosheets could be vertically aligned to form hollow, porous structures within the tubes, which were then etched away. 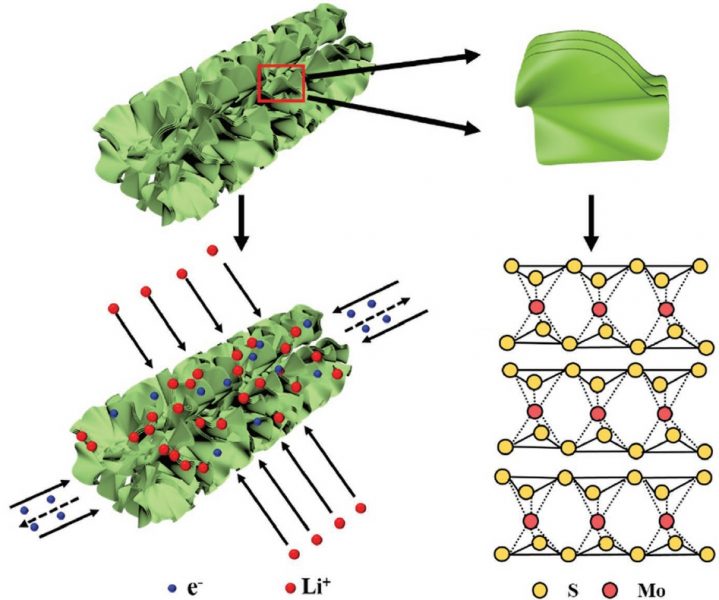 This new structure enables effective electrolyte diffusion and has a short ion path, leading to a better rate performance when used in lithium-ion batteries. It also displays a greater electrochemical stability, surviving over 120 days in air without the common re-stacking issues that would normally see the metastable metallic phase transform into the less useful semiconducting phase. 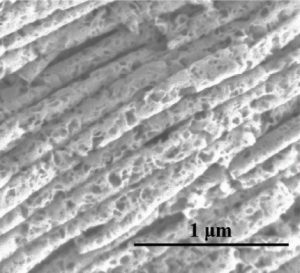 In this work, which was highlighted on a cover of Advanced Energy Materials, it was also possible for the first time to identify the characteristic oxidation peak of MoS2’s metallic phase using cyclic voltammetry, meaning that these structures are not only competitive for battery applications, but could also be used for fundamental electrochemical studies of metallic MoS2.

The new anode is able to achieve a capacity of 1100 mAh per g under a current density of 5 A per g after 350 cycles, which easily beats the 372 mAh per g of commercial graphite anodes.